SEAN Tarry may have as many as three strings to his bow in the 2017 Computaform Sprint , but even if Trip To Heaven and Exquisite Touch arrive at the top of their game, the high-class mare Carry On Alice could have them at her mercy when she defends her title on Champions Day.

If ever S’Manga Khumalo enjoyed a proverbial “armchair” ride, Tuesday night’s cruise aboard Carry On Alice was it. She was in total command of her preparation run, a Pinnacle Stakes over 1100m and won by 1,75-lengths which could have been 11,75-lengths if the jock lifted a finger.

Carry On Alice (1-7) didn’t bump the glitterati of Gauteng’s sprinters, but her overall well-being and relaxed demeanour were really all her followers needed to confirm ahead of SA’s premier sprint at month-end.

Tarry commented:  “It’s not really that we brought Carry On Alice back on the boil after a rest, she had a lovely holiday and came back nice and fresh. She loves life, she is special. We’ll really miss our five-year-olds when they leave the stable. Horses like the ones we have at the moment don’t come around every day.”

Khumalo said: “I have a soft spot for her, so has Mr Van Niekerk and Mr Warner (Chris and John (with Jill), part-owners). She had a nice gallop the other day, blew my mind. She gives you what you want. I knew we wouldn’t have to push her hard for this race.”

Carry On Alice, by Captain Al from Carry on Katie, has won 10 of 27 starts for Van Niekerk, Warner and her breeder, Klawervlei Stud, who retained a racing share in her career. 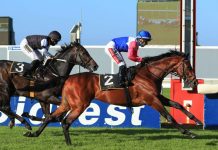 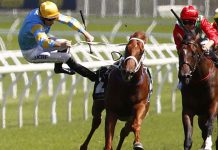 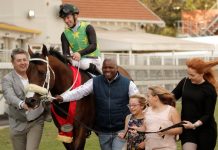 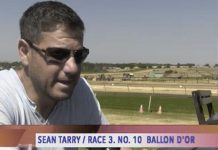 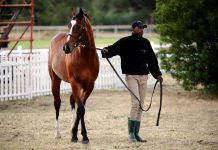 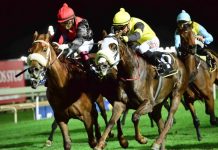 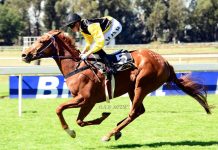