A recent high-profile export that fell by the wayside, along with the bleak outlook brought by the global pandemic shouldn’t have led a horse like Katak to Kranji.

Lest we also forget, he’s from South Africa, a country that Singapore-based owners shun because of the arduous journey horses have to be put through before reaching our shores due to the strict quarantine protocols that arose from the African Horse Sickness outbreak in the last decade or so.

Since Jay Peg’s win in the 2008 Group 1 Singapore Airlines International Cup, the insurance businessman has been longing to see his famous blue, white and pink silks shine for the second time on the big stage at Kranji.

And he just loves Singapore and its racing!

Along came five-from-five winner and Cape Winter Series Triple Crown winner Katak, whom Shirtliff saw as the right horse for the job, especially a gilt-edged prize at the end of the year, the $1 million Group 1 Singapore Gold Cup (2000m) on November 14.

No doubt, the endless hoops to go through, let alone the bearish sentiments, not just here but around the world, could have given Shirtliff cold feet, more so when the last top gun he sent, 2017 Vodacom Durban July winner Marinaresco, didn’t even get to face the starter at Kranji.

South Africa is not short of their own marquee ‘black type’ races like the Sun Met, an event Shirtliff famously won three years in a row (2007-2009) with the mighty Pocket Power, and had actually contemplated for Katak in consultation with his Cape Town trainer Piet Steyn.

But thankfully for Singapore racing fans and trainer Ricardo Le Grange, Shirtliff is a risk-taker who didn’t mind bucking the trend with Katak, who after more than one year without racing, makes his Kranji debut in the $85,000 Class 2 Polytrack race over 1200m this Saturday.

When Shirtliff asked his son Guy, who races horses with Le Grange at Kranji, if he was keen on a one-third share (with the other third going to Shirtliff’s South African partner Bryn Ressell), the chance of partaking in much classier horseflesh than the likes of Churchill, Captain Jamie, Sayonara, California or Zoffspeed saw the Singapore-based equity analyst join in a heartbeat.

Given the long time away, that first-up Saturday assignment, which will be too sharp, anyway, may well bring Katak’s undefeated run to a screeching halt, but Shirtliff Jr said that it was after all just a launchpad towards bigger and better things ahead.

“The main mission is the Gold Cup. The QEII Cup wouldn’t hurt as he’s a 1600m-2000m horse, but the Raffles Cup in three weeks’ time (September 18) will be his next target after this Saturday’s,” he said.

“We had no luck with Marinaresco a couple of years ago, but he wasn’t 100% sound and he hurt his knee. He never got a chance to race in Singapore and we sent him back to South Africa to retire at the Hemel ‘N Aarde Stud, where he joined Pocket Power, who unfortunately died last month.

“But when Katak was insured, he got an A+. His wind, his joints are perfect, he has great proportion, has no issues, and on raw ability, Dad just thought Katak could well be the next horse to win a big race for him at Kranji.

“He’s won three Group 3 races over 1600m, 1800m and 2400m at home (all at Kenilworth, with the last Leg aptly named the Pocket Power Stakes), which was the Triple Crown of the Cape Town Winter Series.

“He’s beaten some of the best horses in South Africa, in the same calibre as the Durban July winner Kommetdieding, though he hasn’t raced against him, but it gives you an idea how he is clearly on par with the top horses.

“Unfortunately, it’s taken him longer to get here. We thought the quarantine would take nine months, but it’s taken 12 months, including four months in Mauritius, three months in France where he was pre-trained.

“Ricardo has done a fantastic job with him given he’s only been in work for six weeks after quarantine. He said he has been getting better and better with every gallop, every speed work he’s given him.

“He was blowing a lot after his barrier trial (close second to Sing A Song on August 26), but that was probably because he has not raced in a year.

“Over 1200m, which is not ideal, he may need the run against quality sprinters, but that should still bring him up towards the Raffles Cup.

“Ricardo said that ideally, the horse needed another month to get fitter and better, but he’s such a special horse, and he has not lost any of his ability.

“If he keeps improving, by the QEII Cup, he’ll be closer to his best form. He’s such an easy horse to train and ride, he’s got a high cruising speed and can slot in anywhere.

“He can run both ways, handy or from the back, but he’s not a frontrunner. He’s not a big horse at 470kgs, but he’s got a lot of natural ability.

“Though I share him with Dad and Bryn after Piet sold his 50% share, Dad told me he would run in my pink and blue striped colours in Singapore.”

Shirtliff added it was through a bit of luck that Katak became a rising superstar for the family as he could have easily been the one that got away.

“It’s an interesting story how Dad got him. He was actually passed in at the yearling sale,” he said.

“The rest is history, and he could even become a stallion prospect one day. Last time, we would send them to Dubai and Hong Kong and if they’re good enough, they’d go back to the breeding barns in South Africa.

“We decided to take the Singapore route for the first time this year. Singapore is a good location, they can shuttle anywhere, like Australia or Hong Kong, it’s so easy to travel.

“But we’re not there yet. He still has to prove himself here, but he’s such a special horse and hopefully, he shows up too on the international stage.”

Katak will be ridden by French jockey Marc Lerner, who has been regularly seen as his partner in the mornings. 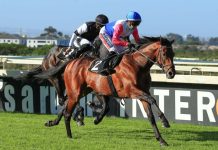 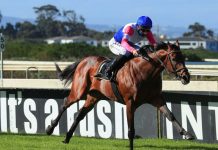 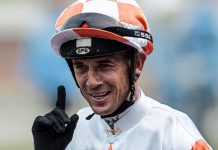 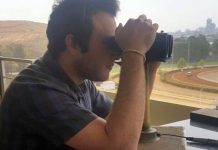 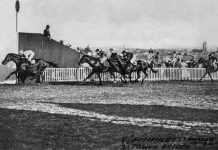 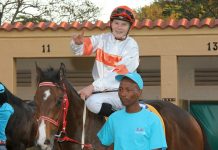