Preview: SET THE DATE (4) was a beaten odds-on chance last outing. Can make amends and give Carl Hewitson his first KZN winner. BATTLE OF STIRLING (8) disappointed last run. Has shown ability and was beaten by a promising sort last outing. SOWETO HALL (6) had the worst of the draw last run. Has improved in blinkers and can feature prominently. KING CYRUS (1) is lightly raced. May just have needed his last run and can place. (Andrew Harrison: 4-8-6-1).

Preview: CUBANELLE (6) made good improvement with first time blinkers and over a bit of ground. Lightly raced and can still improve. RED HOT NIGHT (1) is a battling maiden but meets a weak field here. He has done well over course and distance and does have a plum draw. ROCKET RHUMBA (2) improved last run when dropped in trip. Can feature in this company. CHAMPINGATTHEBIT (12) has a poor draw and has yet to show. But did find good market support last run and can surprise. (Andrew Harrison: 6-1-2-12).

Preview: ALFREDO (9) is at his best over course and distance and should make a bold showing. MONTANA SKY (12) has pulled another wide draw and was unlucky to be kept wide throughout in his last start. He gets a capable 2.5kg claimer up and can finally get it right. LIGHTENING SPIRIT (10) has been close-up in his last three and goes well on the poly. He should be right there. CHAKALAKA GUY (11) improved in blinkers last run and can still show more. (Andrew Harrison: 9-12-10-11).

Preview: Wide open. CORSAGE (12) ran well below her best last time out and is best ignored. She made a smart debut for her new stable although she does have a wide draw to contend with. SILVER BEAUTY (4) has been knocking at the door of late and meets a modest field here. She has a lot in her favour. CAPRICCIO (9) is better than her last effort. She has done well this trip. CATALYST (6) has shown some recent improvement. She is lightly raced and can do better over this shorter trip. (Andrew Harrison: 12-4-6-9).

Preview: Open. There should be very little between MASTERS BEAUTY (1) and LADY SHARON (2) a neck separating them when last they met. Lady Sharon gets 3kg from Masters Beauty and that could be the telling factor. SHORT SKIRT FLIRT (4) made a promising local debut and has some useful Highveld form. She has a handy weight and can come on from that last run. QUEEN’S PLAIN (10) has the worst of the draw and was also drawn badly last run. She has come to hand of late. (Andrew Harrison: 4-2-1-10).

Preview: SECRET DYNASTY (1) won well over course and distance two runs back. This is a competitive field but he’s drawn well and can go close again. PINA COLADA (5) takes on males but has consistent form over course and distance. She rates a strong chance. CALL ME TONIGHT (2) has been sprinting and should enjoy the extra here. GRANDE MAESTRO (3) was a beaten favourite last run. He has been rested but had been showing good form before that. (Andrew Harrison: 1-5-2-3).

Preview: TOP SALUTE (4) did well against much stronger last outing. Two smart efforts prior to that from wide draws. FORT ROYAL (10) has been in good form over shorter. He stretches an extra furlong and should go close. SATARA (7) improved in blinkers last run from a bad draw. Can do much better here. WHAT A SARAH (9) steps up in trip with a 4kg claimer up. Not out of it. (Andrew Harrison: 4-10-7-9).

Preview: TONIGHTSFIGHTNIGHT (9) has come good on the poly winning his last two. He took a six-point shunt up the handicap but still looks capable of going in again. RITE OF PASSAGE (8) was pressed hard to shed his maiden when odds-on but he has shown promise and the poly should suit. BEAT IT (4) has been knocking on the door for some time now. She is course and distance suited and a win would not be out of turn. BINARY STAR (3) found good market support when dropped back to a sprint and he won well. A repeat can see him close again. (Andrew Harrison: 9-8-4-3).

Preview: STAND BY ME (8) was caught close home over course and distance last time out. A repeat should see him close again. BRAVO ZULU (5) is always game and his last win was over course and distance. He had poor draws at his last two. JERRY THE JUGGLER (3) was staying on well last start. The blinkers come off. PHIL’S POWER (2) has been close-up at his last two over further. He is a seasoned campaigner and is not out of it over this shorter trip. 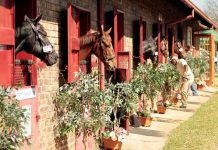 Racing’s application is ‘on top of the pile’! 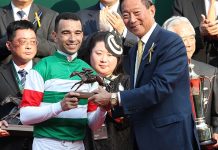