Got The Greenlight, the 2020 Equus Champion three-year-old colt, has been sparingly raced by wily handler Joe Soma, who has picked his contests well. The now four-year-old by Gimmethegreenlight bagged his fourth Gr1 race, winning the HF Oppenheimer Horse Chestnut Stakes over 1600m under in-form Muzi Yeni.

“The race was custom-made for him and when the gaps opened, he responded immediately. He was the best horse in the race, but I hit the front too soon. He thought he’d done enough in the closing stages, so I had to wake him up to hold off Copper Mountain,” Yeni said.

“I am honoured to have won a great mile like this,” said trainer Joe Soma, who thanked his owning partners Hassen Adams and Dayalan Chinsammy. Soma bought their charge for just R110 000 off the 2018 CTS April Yearling Sale. Got The Greenlight has won them R2,7-million so far.

On Sunday, Vaughan Marshall’s Seeking The Stars quickened well to win the
R150 000 Gr3 Byerley Turk over 1400m at Hollywoodbets Scottsville, after being held up for his finishing run by a confident Anton Marcus.

Seeking The Stars is a Klawervlei Stud-bred son of Vercingetorix from a mare by Count Du Bois who went through the ring for R425 000 at the 2019 CTS Ready To Run Sale. He races for KZN-based owner Rakesh Sewgoolam.

On the same day, Marshall’s smart grey filly Mirage (Richard Fourie) came in fresh off a ten-week break to clinch her first stakes success in the R100 000 Listed Kwazulu-Natal Stakes.

A R500 000 2018Cape Premier Yearling Sale graduate, Mirage was bred by Klawervlei Stud and is by the late champion Captain Al out of the US-bred mare, Sea Glitter. She has won 3 races with 5 places from 12 starts for stakes of R251 725.

Another Cape raider, Princess Calla, showed her quality after a nine-week break, drawing away to win the Gr3 Umzimkhulu Stakes over 1400m, her second graded success from seven starts for owner Mario Ferreira and trainer Adam Marcus. The three-year-old daughter of Flower Alley beat Caya Coco by just over two lengths.

“She impressed with this effort. She quickened well and I’m glad this is out of the way and we can move forward. Her next stop is likely to be the KZN Fillies Guineas, but there are plenty of options in this season,” said the trainer. 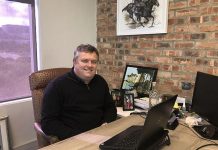 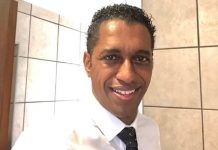 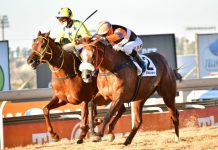 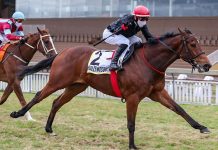 All Together now: “Hail Columbia!” 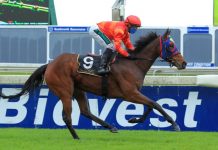 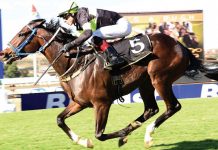 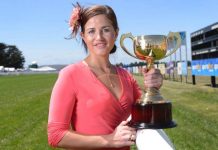 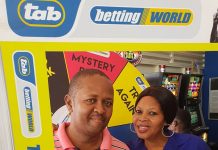 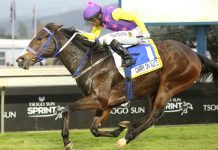