RACING fans across the board have been unanimous in their praise for the organisational acumen shown by Saturday’s Summer Cup event organisers, Campbell and Campbell, led by Angus Campbell, a young entrepreneur who has turned Cup Day on its head.

Trainer Mike de Kock wrote on his website: “Angus Campbell and his promotional team deserve compliments for what they’ve achieved here. I haven’t experienced a race day like this in Gauteng since the days of the OK Gold Bowl. The crowd was fantastic, the entertainment was superb. If we can build on this there are good times ahead!”

Said racing personality Grant Knowles: “This is the best race day I’ve been to in at least 10 years!”

Prominent owner John Finlayson, normally outspoken against racing’s regime, commented: “What a fantastic day, the racing and entertainment was just superb, we need to give credit where it is due. We had several jockeys come to my suite at Turffontein after the event and they were all glowing about riding in front of such a nice crowd. Well done to all involved!”

Turffontein was transformed into a visual wonderland filled with pops of colour, floral accents and glamorous outfits to compliment the Summer Chic theme. The theme was expertly interpreted by hospitality providers and race goers alike – with floral accents, bold colours, patterns, fascinators and detailed headwear creating a summer sensation against the backdrop of white marquees.

The half time entertainment from the headline act, Freshly Ground, had everyone in the packed grandstands foot tapping and hand clapping. It was a sensory delight for racegoers, turning what is usually the front parade ring, into a sea of colour and movement with dancers, choirs and school children seamlessly choreographed and adorned with bright and colourful costumes. The giant Ferris wheel, which has become something of a landmark at Turffontein on Summer Cup Day, turned consistently in the distance providing adults and children alike with aerial views over the racecourse.

Angus Campbell himself was chuffed and noted in a media release: “Things don’t always work out as planned. Sometimes they work out even better.”

In a chat with Turf Talk, he said: “Mike de Kock’s reference to the OK Gold Bowl made me recall a day several years ago when I took photos of the Gold Bowl portraits in the Phumelela Boardroom which show the infield parking chock-a-block on one of those famous Gold Bowl race days. We’ve been aiming at that, on Saturday I’d say we got the infield about two-thirds full with parked cars, we’re almost there!”

Campbell explained how his company turned the Summer Cup around.

“I’d only been to one race meeting before, a Durban July. About eight years ago I was watching the Summer Cup broadcast on TV and the stands were empty. I thought to myself, ‘we can do something here’ and I got in touch with Chris van Niekerk, who in turn put us onto Clyde Basel.

“I promised Chris that we’d make a difference and we can finally show that we have done it. We hosted our first small hospitality site at the Summer Cup eight years ago, we had 300 people there. Ever since then we’ve been determined to fill the stands with a new audience. The most important thing we learnt is that you have to innovate boldly, take risks and keep going despite criticisms and inevitable failures. We have a small young team and I am extremely proud of what they have achieved. Turffontein is not an easy sell, in the early days none of the bigger hospitality companies wanted to get involved in fear of burning their fingers, they felt we were on a hiding to nothing. My team sweated blood and tears, this was an extremely testing project.”

As previously reported, Campbell by his own admission failed at a few initial strategies and then made it his sole purpose to study the social behaviour of young and trendy Gautengers, and to get them to come racing.

Said Campbell: “We had a massive Summer Cup billboard erected in Johannesburg a few years ago. We didn’t get a single call from it, and it was expensive. We had many young event organisers contacting us wanting to get involved but while they had many followers, they had limited funds, so we decided to scrap the expensive billboards and invest in them instead.

“With the assistance of the social media spectrum, and these young event organisers, we have managed to reach many, many more people than usual. Some of these social pioneers have up to 2-million followers on Twitter alone. They talk to their legions of supporters all day and, as we hoped, they got many of them to come racing.”

This is how it worked: Four years ago Campbell and his team partnered with 3 of these social pioneers and slowly built this up to the 12 who were involved this year. They purchased tickets for their guests and in return they were each offered the basics at Turffontein for Cup day – a marquee tent and seating for their guests, toilet facilities and set-up, which in some cases can run to between R50,000 and R100,000. They could, therefore, start the day without a big basic cost and could spend their money on décor, food and so on. All marquees were erected with access to the track, so that every racegoer could see the horses go by.

This strategy coincided with Rob Scott and Phumelela deciding that the Summer Cup should be ‘The Peoples Race’. They took a big risk by opening the race up to families and putting up the funds for the massive carnival and half time show which is now a key feature of the event.

“Four years ago, the Summer Cup hosted 3,500 people. That went to 6,000 the next year when it rained and we raced on Saturday and Sunday, and last year to 10,500,” said Campbell. “To stay innovative and improve even more, we have to keep thinking out of the box, which may actually entail going back to more traditional advertising, which will bring bigger sponsors and media partners.”

The other really encouraging success this year was the increased betting revenue. TAB Betting World stepped in as the headline sponsor and went all out in building state of the art betting pods for this event and the increased numbers speak for themselves.

Campbell concluded: “I’d like to thank the sponsors who supported the race, the social pioneers who have embraced the race and grown it into the People’s Race, also John Stuart, Rob Scott and Phumelela who have trusted us with running this race for the last four years. Last, but not least, our thanks to the racing fraternity who have patiently endured the many innovations we have implemented. 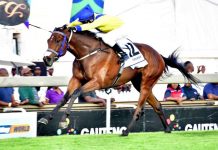 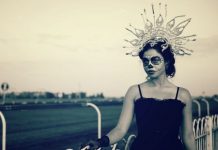 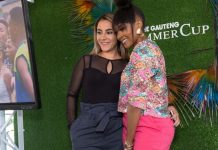 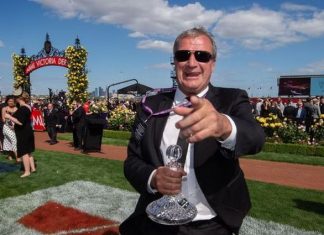 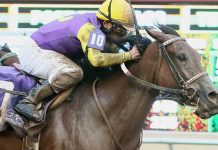 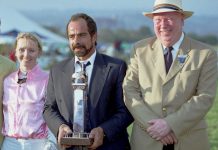 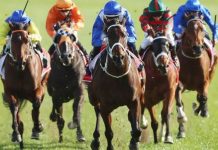 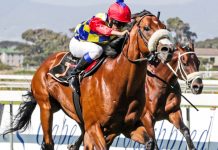